Home PRESENTATION OF THE MUNICIPALITY Sights The Convent of Faneromeni

The Convent of Faneromeni 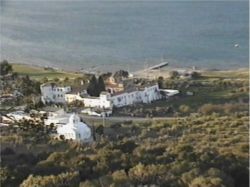 The monastery was rebuilt in the 17th century by Lampros Kanelos (Saint Laurentios), on the spot were he found the Ikon of The Virgin Mary . And he named the Church Faneromeni meaning (Reveled). During the revolution of 1821 women and children found refuge in the monastery and it was used to hospitalize injured officers of the Greek army. 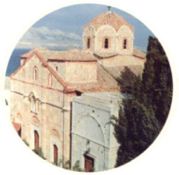 The illustrations of the magnificent Fresco were finished by George Markos in 1735. When prior was the son of Saint Laurentios , Ioakeim. The Monestary was transformed to a Convent in 1944. The first Mother Superior was Christonymphi Tsigeli.

The convent as it is today. It is located on the eastern part of the island and it is surrounded by thousands of pine trees and olive trees near a splendid coast. We celebrate the Convent every year on the 23rd of August and the festivities most times last more than three days. People come to Faneromeni to worship TheVirgin Mary from all parts of the world.