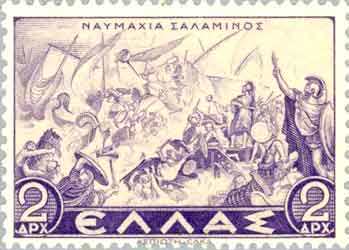 The Battle of Salamis was a naval battle fought between an Alliance of Greek city-states and the Achaemenid Empire of Persia in September 480 BC in the straits between the mainland and Salamis, an island in the Saronic Gulf near Athens. It marked the high-point of the second Persian invasion of Greece which had begun in 480 BC.

To block the Persian advance, a small force of Greeks blocked the pass of Thermopylae, whilst an Athenian-dominated Allied navy engaged the Persian fleet in the nearby straits of Artemisium. In the resulting Battle of Thermopylae, the rearguard of the Greek force was annihilated, whilst in the Battle of Artemisium the Greeks had heavy losses and retreated after the loss at Thermopylae. This allowed the Persians to conquer Boeotia and Attica. The Allies prepared to defend the Isthmus of Corinth whilst the fleet was withdrawn to nearby Salamis Island.

Although heavily outnumbered, the Greek Allies were persuaded by the Athenian general Themistocles to bring the Persian fleet to battle again, in the hope that a victory would prevent naval operations against the Peloponessus. The Persian king Xerxes was also anxious for a decisive battle. As a result of subterfuge on the part of Themistocles, the Persian navy sailed into the Straits of Salamis and tried to block both entrances. In the cramped conditions of the Straits the great Persian numbers were an active hindrance, as ships struggled to manoeuvre and became disorganised. Seizing the opportunity, the Greek fleet formed in line and scored a decisive victory, sinking or capturing at least 200 Persian ships.

As a result Xerxes retreated to Asia with much of his army, leaving Mardonius to complete the conquest of Greece. However, the following year, the remainder of the Persian army was decisively beaten at the Battle of Plataea and the Persian navy at the Battle of Mycale. Afterwards the Persian made no more attempts to conquer the Greek mainland. These battles of Salamis and Plataea thus mark a turning point in the course of the Greco-Persian wars as a whole; from then onward, the Greek poleis would take the offensive. A number of historians believe that a Persian victory would have stilted the development of Ancient Greece, and by extension ‘western civilization’ per se, and has led them to claim that Salamis is one of the most significant battles in human history.