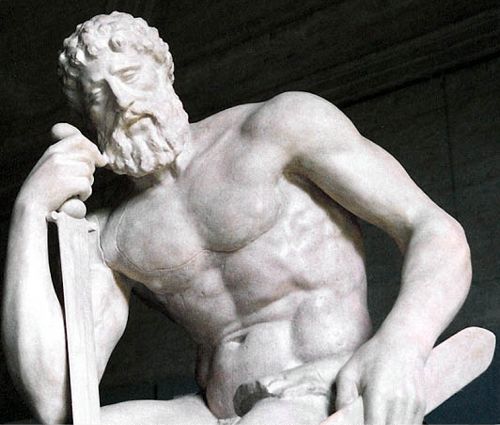 Ajax is the son of Telamon, who was the son of Aeacus and grandson of Zeus, and his first wife Periboea. He is the cousin of Achilles, the most remembered Greek warrior, and elder half-brother of Teucer.
In Homer’s Iliad he is described as of great stature and colossal frame, the tallest and strongest of all the Achaeans, but for his cousin Achilles in skill-at-arms, and Diomedes to whom he lost a sparring competition as well as the ‘bulwark of the Achaeans’. He was trained by the centaur Chiron (who had also trained his father, Telamon, and Achilles’ father Peleus), at the same time as Achilles. Apart from Achilles, Ajax is the most valuable warrior in Agamemnon’s army (along with Diomedes), though he is not as cunning as Nestor, Diomedes, Idomeneus, or Odysseus. He commands his army wielding a huge shield made of seven ox-hides with a layer of bronze. Most notably, Ajax is not wounded in any of the battles described in the Iliad, and he is the only principal character on either side who does not receive personal assistance from any of the gods who take part in the battles.

In the Iliad, Ajax is notable for his abundant strength and courage, seen particularly in two fights with Hector. In Book 7, Ajax is chosen by lot to meet Hector in a duel which lasts most of a whole day. Ajax at first gets the better of the encounter, wounding Hector with his spear and knocking him down with a large stone, but Hector fights on until the heralds, acting at the direction of Zeus, call a draw: the action ends without a winner and with the two combatants exchanging gifts.

The second fight between Ajax and Hector occurs when the latter breaks into the Achaean camp, and fights with the Greeks among the ships. In Book 14, Ajax throws a giant rock at Hector which almost kills him. In Book 15, Hector is restored to his strength by Apollo and returns to attack the ships. Ajax, wielding an enormous spear as a weapon and leaping from ship to ship, holds off the Trojan armies virtually single-handedly. In Book 16, Hector is able to disarm Ajax (although Ajax is not hurt) and Ajax is forced to retreat, seeing that Zeus is clearly favoring Hector. Hector and the Trojans succeed in burning one Greek ship, the culmination of an assault that almost finishes the war. Ajax manages to kill many of the other Trojan lords, including Phorkys.

Achilles was absent during these encounters because of his feud with Agamemnon. In Book 9, Agamemnon and the other Greek chiefs send Ajax, Odysseus and Phoenix to the tent of Achilles in an attempt to reconcile with the great warrior and induce him to return to the fight. Although Ajax speaks earnestly and is well received, he does not succeed in convincing Achilles.

When Patroclus is killed, Hector tries to steal his body. Ajax is the man who fights to protect the body, and he takes it back safely to Achilles at the camp. Ajax, assisted by Menelaus, succeeds in fighting off the Trojans and taking the body back with his chariot; of course, the Trojans had already stolen the armor and left the body naked. Ajax’s prayer to Zeus to remove the fog that has descended on the battle to allow them to fight or die in the light of day has become proverbial.

Like most of the other Greek leaders, Ajax is alive and well as the Iliad comes to a close. Later, when Achilles dies, killed by Paris (with help from Apollo), Ajax and Odysseus are the heroes that fight against the Trojans to get the body and bury it next to his friend, Patroclus. Ajax, with his great shield and spear, manages to drive off the Trojans, while Odysseus pulls the body to his chariot, and rides away with it to safety. After the burial, both claim the armor for themselves, as recognition for their efforts. After several days of competition, Odysseus and Ajax are tied for the ownership of the magical armor which was forged in Mount Olympus by the god Hephaestus. It is then that a competition is held to determine who is the more elegant speaker. Odysseus proves the better, and is given the armor. Ajax is furious about it, and falls to the ground, exhausted. When he wakes up, he is under the influence of a spell from Athena. He goes to a flock of sheep and slaughters them, imagining they are the Achaean leaders, including Odysseus and Agamemnon. When he comes to his senses, covered in blood, and realizes what he did, with diminished honor he decides that he prefers to kill himself rather than to live in shame. He does so with the same sword Hector gave him when they exchanged presents. (Iliad, 7.303). From his blood sprang a red flower, as at the death of Hyacinthus, which bore on its leaves the initial letters of his name Ai, also expressive of lament (Pausanias 1.35.4). His ashes were deposited in a golden urn on the Rhoetean promontory at the entrance of the Hellespont. This account of his death is from the play, Ajax (Sophocles); in Pindar’s Nemeans, 7, 8; Isthmian 4; and in Ovid’s Metamorphoses, 13.1. Homer is somewhat vague about the precise manner of Ajax’s death but does ascribe it to his loss in the dispute over Achilles’s shield: when Odysseus visits Hades, he begs the soul of Ajax to speak to him, but Ajax, still resentful over the old quarrel, refuses and descends silently back into Erebus.

Like Achilles, he is represented (although not by Homer) as living after his death in the island of Leuke at the mouth of the Danube (Pausanias 3.19.11). Ajax, who in the post-Homeric legend is described as the grandson of Aeacus and the great-grandson of Zeus, was the tutelary hero of the island of Salamis, where he had a temple and an image, and where a festival called Aianteia was celebrated in his honour (Pausanias 1.35). At this festival a couch was set up, on which the panoply of the hero was placed, a practice which recalls the Roman Lectisternium. The identification of Ajax with the family of Aeacus was chiefly a matter which concerned the Athenians, after Salamis had come into their possession, on which occasion Solon is said to have inserted a line in the Iliad (2.557-558), for the purpose of supporting the Athenian claim to the island. Ajax then became an Attic hero; he was worshipped at Athens, where he had a statue in the market-place, and the tribe Aiantis was named after him. Pausanias also relates that a gigantic skeleton, its kneecap 5 inches (130 mm) in diameter, appeared on the beach near Sigeum, on the Trojan coast; these bones were identified as those of Ajax