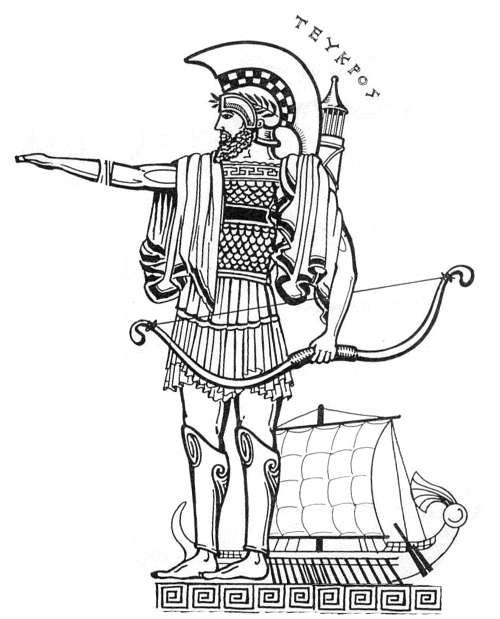 In Greek mythology Teucer, also Teucrus or Teucris was the son of King Telamon of Salamis and his second wife Hesione, daughter of King Laomedon of Troy. He fought alongside his half-brother, Ajax, in the Trojan War and is the legendary founder of the city Salamis on Cyprus. Teucer was the nephew of King Priam of Troy and so the cousin of Hector and Paris – all of whom he fought against in the Trojan War.

During the Trojan War, Teucer was mainly a great archer who loosed his shafts behind the giant shield of his half-brother Ajax the Great. When Hector was driving the Achaeans back toward their ships, Teucer gave the Argives some success by killing many of the charging Trojans, including Hector’s charioteer, Archeptolemus son of Iphitos.

However every time he shot an arrow at Hector, Apollo, the protector of the Trojans, would foil the shot – an ironic reference to the fact that Apollo would guide Paris’ arrow into Achilles’ heel.

In his rage at Teucer’s success, Hector picked up a huge rock, and flung it at Teucer. The rock injured Teucer, so that he should retire from the fighting for a certain period of time. He does take up a spear to fight in the war after his bow is broken by Zeus. He once again challenged Hector, and he narrowly avoided the path of Hector’s flying javelin in the ensuing battle. He was also one of the Danaans to enter the Trojan Horse.

Because of his half-brother’s suicide, Teucer was disowned by his father and emigrated to Cyprus, where he founded the city of Salamis which he named after his home state