Brothering of Municipalities of Salamina and Ammochostou Cyprus

In 1998 were realised the Brothering of Municipalities of Salamina and Ammochostou Cyprus, with participants the Mayors: Athanassios Makris and Andreas Poygioyros, which constituted one cultural fact with national dimension. 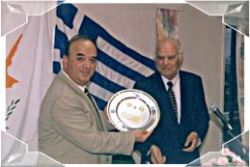 Ammochostos of Cyprus, successor city of Salamina of Cyprus which founded by Teykros Telamonios brother of Aianta, has, from centuries, historical bonds with the island of Salamina.

This Bond has in general created fraternal feelings in the conscience of Salaminians for the residents of Ammochostou and to the Cypriot population.

The Brothering of two historians and relatives of cities strengthens this bond and at the same time adds also the voice of protest of population of island of Salamina in the demand for fair and final solution of Cypriot problem.